When will they learn?

Not so long ago, I wrote a piece about my experiences as a spectator at Eden Park during the HRV Cup. The general gist was there were things that could improve, and the Eden Park Security was right up there on that list. Since that blog, I've been along to the T20 against England and the ODI. Have things improved? Have they heck. I think they've actually worsened. And the biggest kick in the guts is NZ Cricket being quoted in the NZ Herald as being "happy with the level of security".

Let's start at the beginning. It's all about Customer Experience. It's about putting on a fantastic cricket match where all different kinds of people want to come along and enjoy live sport. It's about making those people feel welcome at our place, especially those who have travelled from afar to be here. It's about having suitable facilities, and amenities to make the experience comfortable and enjoyable. And, if they're smart, it's about making those people want to put their hands back into their pockets and come back again, bringing friends and family with them.

To put this into context, I went along to the ODI at Eden Park by myself. At first I wondered how safe I would be, a single chick alone at the cricket, and walking all the way back to the car in the dark afterwards. But, it was either go alone, or stay home and watch it on tv. Watching it on tv? Big fat yawn.
In all honesty, I felt perfectly safe the entire time I was there. Yes there were drunk people to my left and to my right (hell, I was probably one of them for a while there), but nobody was abusive or offensive. Some of them started a Mexican Wave every now and then, and what fun! It's not like Eden Park used to be when I was a kid and we sat in the sun and every time a Mexican Wave went round you got pelted with debris. The debris was non existent. It was just 18000 people bonding over a shared love and enjoyment for live sport and for having a good time.

I love to see the crowd getting involved in the atmosphere- there were so many funny things to watch. These customers were clearly having a good experience. I love seeing all the different banners and always marvel at what people come up with. My favourite was 'BJ or Root?' It disappeared during the match and I heard someone say it had been confiscated by the Fun Police. The banana guys were also hilarious, as were the afro wigged dudes sitting in front of them. Then there were hippos, bunny rabbits and pigs. They must have been absolutely cooking in those outfits as it was a brilliantly fine day.  Luckily for them they were evicted early from the ground by the Fun Police, so they wouldn't have cooked for too long.

Then there was the beach ball. Now, these things are known to be terribly dangerous. So dangerous you wouldn't want your kid playing with one on a beach. And as for a bunch of adults having fun with one at a live sports venue, well that's just asking for trouble. So no wonder the Fun Police had to confiscate it. Stop having fun people!!   The fact that the entire stadium joined in chanting "Give us the ball back!" should have been a signal that the Customer Experience was being seriously negatively impacted. Thank goodness for Tim Southee who was fielding right in front of this area and returned the ball to the spectators. My personal hope is that he sledged the Fun Police while he was at it.... 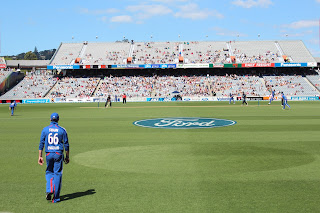 Now if the stadium was at capacity, and resources were being impacted, I could understand the zeal with which the Fun Police went about their work. But it wasn't. There were about 18000 people in the house, 15000 of them had paid to be there. You can see from the picture that there was plenty of space for everybody. And yet, I counted 10 Security Guards and 6 Police Officers in that East stand.  We have heard that there were no arrests, but 87 people were removed from the stadium. Well of course there were no arrests! The Police are not going to go through with an arrest for "enjoying yourself too much" !

I've been at Eden Park during All Blacks tests when the stadium is full to bursting. Granted, a rugby match doesn't take 8 hours like an ODI, but the security is never quite so over zealous as we have been seeing during HRV, T20i and the ODI. We have the Auckland Test coming up. That is (presumably) five whole days of cricket. How will the Fun Police manage that?

I know the  players want and deserve the support of the public and they love a good crowd roaring in the stadium. It inspires them to do more, hearing the support from their fans.
If NZ Cricket want to get more people along to the stadium, paying money to watch the match and support our beloved BlackCaps, then they need to think long and hard about what kind of  Customer Experience they want to provide. It's up to them to make it happen.

Jafa
The random ramblings are from deep (or sometimes not so deep) within myself . These are the thoughts that have been fighting to get out. No claim to correctness, political or otherwise. Not meant to be taken very seriously at all.